The Township's first park, Community Park was acquired in December of 1970. The park is located approximately one mile west of Route 501 on East Petersburg Road. The 33.5 acre park has outdoor pavilions that you can rent for any occasion. There are two large outdoor pavilions, one with a kitchen facility. There is also an enclosed pavilion that has a kitchen facility. In addition to these pavilions, there are also several smaller pavilions in addition to single table shelters. The park has two playground plus a tot-lot, both a grassed and skinned softball field, two restroom facilities, two sand volleyball courts, four horseshoe pits and plenty of common grass areas. 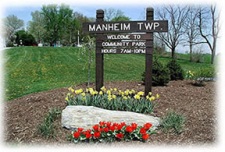 Jaycee Park was acquired in March of 1971. At 2.4 acres, this park is the classic small neighborhood park located off Edgemoor Court in the southeastern part of the Township. This park offers a basketball court, two playgrounds, picnic tables, grills and an open grass area, as well as shaded picnic areas. The park also features a slide, two spring toys, a backhoe digger and talk tubes.

Acquired in February of 1972, Municipal Park is centrally located in the Township with Municipal Drive going right through it. As the name implies, this park accommodates the Township's Municipal Office, Police Building, and Ambulance Association. At 23 acres, Municipal Park has two softball fields, four soccer fields, a playground and a mini-shelter.

Acquired in January of 1977, Stauffer Park is the Township's signature park. The park is located along Route 501, just north of the city of Lancaster and adjacent to what was the Lancaster Stockyards. While not the largest park, at 18 acres, Stauffer Park was willed to the Township by its former owners for the pleasure of its residents and visitors. Stauffer Park is the only park to have a Board of Trustees to oversee its operations. The Manheim Township Recreation Department utilizes the Mansion as their main office. The Mansion is an old homestead that is registered with the Lancaster County Historic Preservation Trust. The Mansion houses several offices as well as meeting rooms. Stauffer Park also has a Carriage House which has been restored and used for various recreational programs and classes. The park offers a formal garden, pet cemetery, four tennis courts, three basketball courts, one volleyball court, a soccer field, a lighted softball field, lighted walking/biking paths and a wide variety of specimen trees and shrubs throughout.

Acquired in December of 1986, Skyline Park is 7.9 acres and accommodates the Skyline Pool. The park is located on Eden Road, just off of Oregon Pike. Skyline Park has a lighted football field, which is used by the local midget football association. Skyline offers one basketball court, a sand volleyball court, and has a walkway/bikeway that serves as a linkage to the east at East Roseville Road.

Acquired in September of 1998, Reidenbaugh is part of the Reidenbaugh Elementary School. At 12.2 acres, the park offers several soccer fields, two softball fields (one grass infield), four tennis courts, a basketball court, one volleyball court and a playground.

Acquired originally in 1989, and the second parcel in 1993, Landis Woods at 69.9 acres, is one of the Township's largest tracts of natural undeveloped land. The park has its own unique management plan which calls for the natural preservation of this land and heritage. Within Landis Woods is the Boettcher House Museum, which houses a small museum and nature center, as well the Landis Woods Performing Arts Center. The Boettcher House also offers a place to have meetings, banquets and small parties. The park offers passive recreation with hiking paths and a native planting area that is now a model for native restoration projects.

Acquired in April of 1989, Stoner Park is on the east side of the Township with two entrances, one off of Northbrook Drive and one off of Winchester Drive in the Northbrook development. At 19.2 acres, Stoner Park has two soccer fields, a playground, one basketball court, one sand volleyball court, restroom facilities and a walkway/bikeway path that goes around the perimeter of the park with eight separate exercise stations. In 2000, we acquired an additional 16 acres.

Acquired in April of 1997, Perelman Park is 5.1 acres and is dedicated to passive recreation. Located along the Conestoga River, off of Landis Valley Road, it was a former site of the American Paper Products Company. Perelman offers a nature trail, a canoe launch, wetland plantings, Butterfly Garden and riparian buffer plantings.

The initial 140 acres was purchased in 1999. This acreage was then subdivided with 26 acres becoming part of the Overlook Golf Course and the remaining 114 acres open space land. In 2003, an additional 16.8 acres was added. The final 9.6 acres was added in 2005. The Campus is centrally located between Fruitville Pike and Lititz Pike, with access drives from Fruitville Pike, Lititz Pike and Basset Drive. Currently, the amenities at the Campus include: soccer fields, baseball/softball fields, four miles of non-motorized paths, a miniature golf course, natural areas, ponds and a dog park, golf practice range, golf course, skating rink, outdoor pool, banquet facility, restaurant, playground, interactive gaming system, disc golf course, skate park, and our new library.